What is Vaping? Here’s Everything You Need to Know 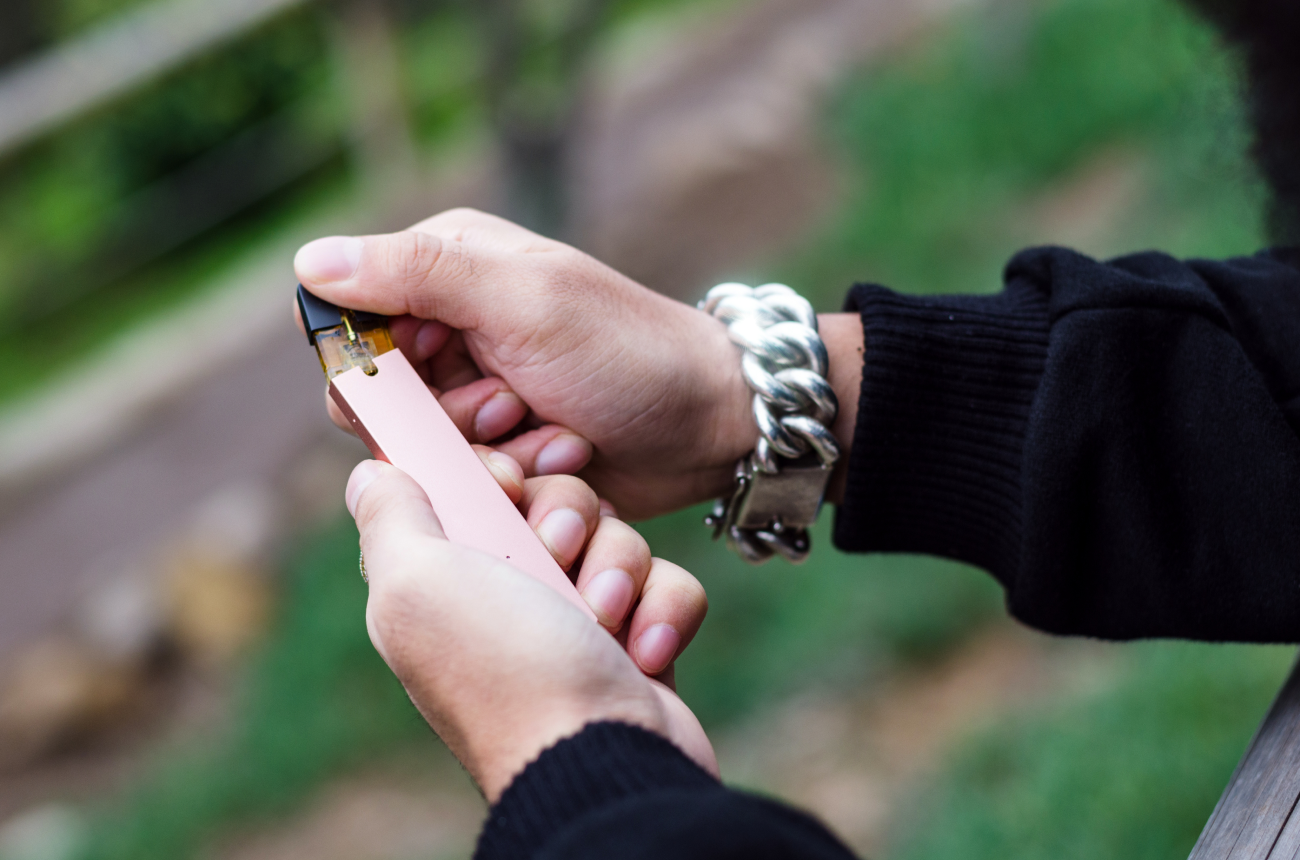 Vaping has become an increasing concern in the United States

Today, almost 11 million adult Americans use vape products. While many believe that vaping is relatively harmless and more socially acceptable than smoking, nicotine is highly addictive and has serious health consequences, no matter how it’s delivered. So, here’s what you need to know.

Vaping devices,* otherwise known as e-cigarettes, are battery-powered instruments that use cartridges filled with a liquid usually containing nicotine, flavorings, and chemicals. This liquid is heated into a vapor, which is then inhaled. Some vaping devices include:

* Vape devices can deliver marijuana or other substances besides nicotine, but this blog focuses only on nicotine.

How does vaping work?

Puffing activates the heating device, which vaporizes the vape juice in the cartridge. The user then inhales the resulting steam. Newer-generation vaping devices provide higher power to the atomizer, delivering nicotine faster and more efficiently to the user.

Vaping is one of the fastest-growing industries in the world, expected to top $64 billion in total worth by 2025. Many analysts predict that it will become the next nicotine epidemic.

In 2014, there were 450 vape brands on the market; since then, researchers report about 10 new brands emerging each month. New flavors crop up even faster. In 2017, researchers counted 20,000 e-liquids being marketed.

As of 2022, the FDA has authorized one company, R. J. Reynolds Vapor Company, to sell vaping devices and tobacco-flavored e-liquids to adults over 21 years of age in the U.S. But just because this company has been provided some sort of clearance by the FDA doesn’t mean that their products are safe to use.

The bottom line is that vaping is popular among those who have formerly or currently smoked as well as those who have never lit up a cigarette before, especially among younger people.

Why do people vape?

Those who vape can be divided into two main demographics, each with a distinct motivation to vape.

Vaping has attracted a majority young demographic – comprised of mostly males ages 18 to 35 – or for about 74% of all adults who vape. This demographic chooses vaping to manage stress, simply because they’re curious, friends vape, or they like the taste. In fact, many adults ages 18 to 24 started vaping because of appealing flavors like watermelon wave, bubble gum, and peach green tea.

But vaping has also found popularity among an older demographic, aged 35 to 65. This group is mostly male and predominantly white. Nearly half started vaping as an alternative to smoking, perceiving it to be healthier.

Those who vape are still a minority of the nicotine-using population compared to those who smoke. But vaping prevalence is growing quickly, which should present cause for concern and sound the alarm for employers responsible for employees’ wellbeing and healthcare.

The physical, financial, and mental effects of vaping

How does vaping affect the body?

Nicotine from e-cigarettes is readily absorbed through the lungs and into the bloodstream. There it prompts the adrenal glands to release epinephrine (adrenaline), stimulating the central nervous system and increasing blood pressure, breathing, and heart rate.

At the same time, nicotine activates the brain’s reward circuits, increasing dopamine levels. This is what makes the substance so addictive.

Besides nicotine, researchers have found more than 60 harmful chemicals and heavy metals in vape juice as well as salts not listed on packaging labels. These include cadmium, nickel, lead, arsenic, chromium, and manganese, many of which can damage the lungs and cause cancer.

Studies attribute many dangers to vaping, including increased risk of:

People may struggle with these side effects without understanding that they are a result of vaping.

How much nicotine is in vape juice?

Vape juice is available in strengths between 0 and 60 mg/mL. In comparison, a pack of cigarettes contains between 20 and 36 mg of nicotine. Unlike Europe, the U.S. does not regulate the nicotine concentration in vape juice, which may be significantly more or less than the label says.

This lack of regulation is complicated by the fact that those who vape, oftentimes have no idea how much nicotine they’re actually ingesting. It’s simple to quantify the number of cigarettes a person smokes per day.

But vaping is a murkier issue. A vape may be used sporadically or frequently over the course of many days, and the amount of nicotine delivered might vary based on tolerance and desired nicotine output. Those who vape generally take longer puffs than those who smoke, making it hard to calculate the nicotine delivered per inhale. Often, those who vape are amazed to learn that they ingest much more nicotine than their friends who smoke.

Cost Per Year For Those Who Vape Versus Smoke

Note: Based on Pivot calculations of vape user feedback and market data.

How is vape regulated?

In the U.S., vape regulation started in 2016, when the FDA became concerned about young people and nonsmokers being attracted to – and addicted to – the nicotine in vaping. Since then, the FDA has banned closed-system flavor pods, flavored vape juice, and flavored disposable vapes.

A new product is causing alarm among healthcare experts – synthetic nicotine – a lab-produced stimulant that many manufacturers are adding to vape products. Users can’t detect a difference between manmade and tobacco-derived nicotine vapes. Manufacturers advertise their artificial product as “tobacco-free”, making it sound safer than traditional vaping. However, there is no chemical difference between the two products. No evidence to date proves that synthetic nicotine is any safer than tobacco-based nicotine.

In April 2022, the FDA announced that it will start regulating synthetic-nicotine vape devices. This should help close a major loophole that manufacturers have used to get around previous restrictions when unregulated synthetic nicotine created a wide-open field for teen exploitation. The CDC reported that 28.6% of middle- and high-school students who vaped favored a synthetic product called Puff Bar, which now ranks higher in teen popularity than former front-runners like nicotine-based Juul and NJOY.

Is it difficult to quit vaping?

Quitting vaping is possible, but it can be tough. The problem lies in the addictive properties of the nicotine being ingested. Nicotine alters neural pathways in the brain, creating a powerful dependency. For those who vape, many have no idea how much nicotine they are consuming, and therefore may be less motivated to quit or don’t see their consumption as a tangible concern. Many vape users become accustomed to the experience that comes with flavored vape juice, inadvertently increasing the frequency of their usage and their exposure to nicotine.

To complicate the issue, no one-size-fits-all quit journey has been effective for vape users. Each person has their own reasons for starting, continuing, and eventually ditching their vape habit for good.

What changes occur in/to someone’s body once they quit vaping?*

What do vape users experience when they quit?

A variety of side effects occur with nicotine withdrawal, with the most common being the craving for a puff. Those who quit vaping also report headaches, nausea, mood changes, sleep issues, feelings of stress, anxiety, irritability, nervousness, frustration, anger, and anxiety. These are most severe during the first three weeks of quitting, although cravings can continue for months or even years.

These symptoms can be overwhelming for someone trying to stop vaping on their own, and explain why tools tailored to each individual quitting can be a defining factor to success.

What’s an example of a program that works?

Pivot is a personalized app-based cessation program offered by employers. It is built to accommodate those who vape, smoke, and use all other forms of tobacco. Leveraging proven cognitive-behavioral theories backed by years of clinical research, Pivot caters tools to those looking to learn, reduce, and eventually quit vaping through skill-building applications.

One employer reported that a whopping 42% of its Pivot enrollees had reduced nicotine consumption after implementing the program. Another employer found that nearly 90% of its Pivot participants completed the program’s syllabus; 74% used Pivot’s coaching services, and 40% quit using tobacco entirely.

Start your journey to beat vaping - this time, for good

Ask your employer about Pivot or begin your quit vaping journey today.