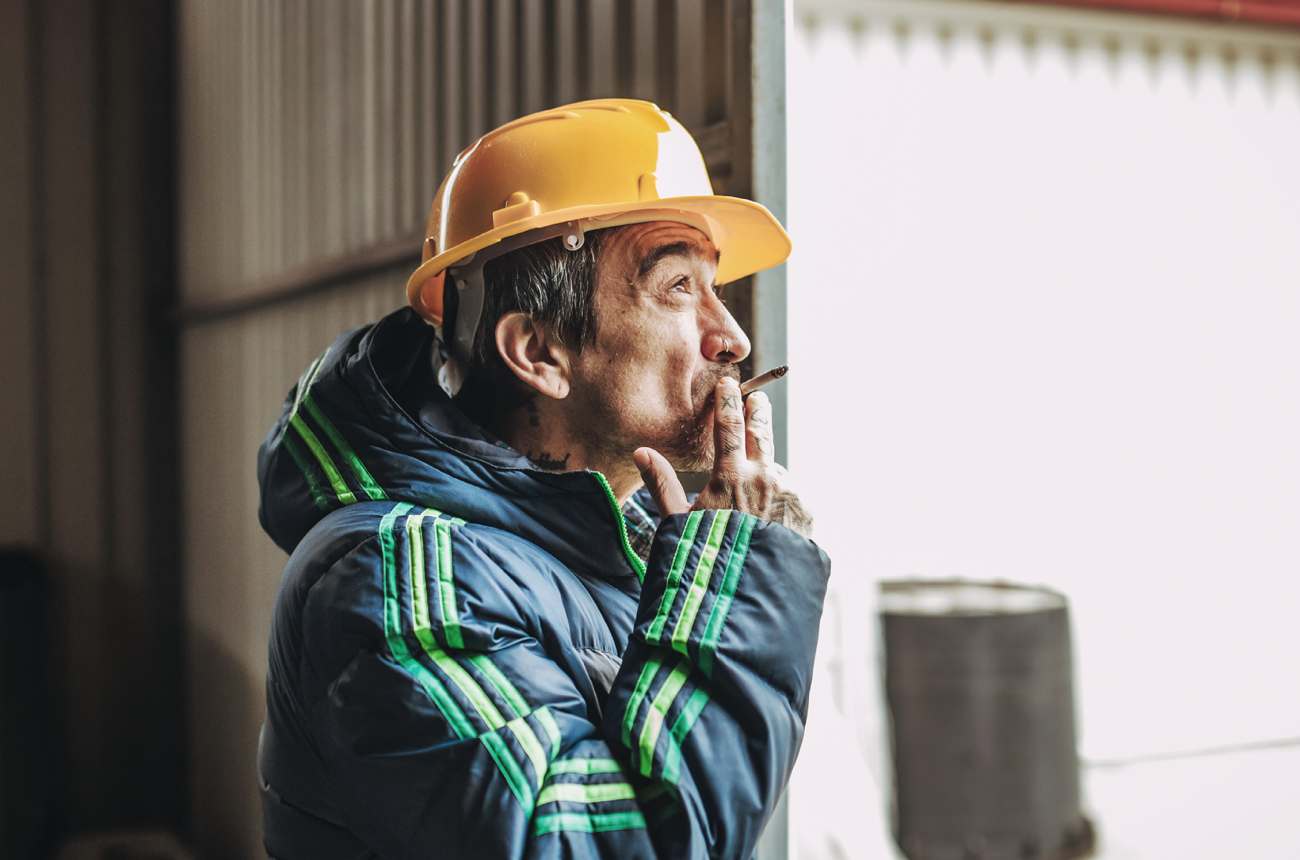 It’s an undeniable reality that many construction workers use tobacco

When surveying workers, a stark reality began to emerge surrounding the impact of the COVID-19 pandemic on tobacco usage. Around 22% of surveyed workers stated that they started using tobacco for the first time during the pandemic; 18% responded that they were using tobacco before the pandemic and increased their usage, and 11% had previously quit using tobacco but started again during COVID-19.

Our findings also highlighted a large gap between what employers believed they knew about employee tobacco use – and the harsh realities.

Why employers often have incorrect data on tobacco use

Employers often have incorrect data related to worker tobacco use. This is due in part to the reliance employers have on workers to self-report their tobacco usage. In fact, 64% of employer respondents believed that self-reporting played a part in inaccurate tobacco-using worker data.

This disconnect between employer perception versus reality is apparent when looking at worker responses. Almost two-thirds (72%) of these respondents admitted to avoiding revealing tobacco use to their employer – and usually for many reasons.

One of the most common reasons workers avoid revealing their tobacco use is due to concern about their reputation at work. As an often stigmatized habit, tobacco use carries the potential to negatively impact perceptions of the tobacco user.

Additional reasons workers avoid revealing their tobacco use to their employer include:

Despite the attempts made by workers to keep the knowledge of their tobacco use under wraps, many of these same workers use tobacco during work hours. This on-the-clock use may be more common than construction industry employers think, and can be detrimental to worker productivity and health.

On-the-clock tobacco use has increased

When and where employees are using tobacco

Survey respondents gave a candid look into their workplace tobacco use habits. While 37% stated that they only used tobacco on official breaks (i.e. lunch, coffee, etc.), 35% shared that they use tobacco any time they get a break (including waiting for assignment); 26% said they were able to use tobacco and work at the same time; and only 2% said they never use tobacco while on the job, even on breaks. And while designated smoking areas are the places where tobacco is most commonly used, additional areas include in a worker-owned vehicle (49%), any convenient location (50%), and in an employer-owned vehicle (29%).

So, with such prevalent tobacco usage among workers, what are employers to do?

Worker tobacco use is more complicated than meets the eye

Statistics such as these illustrate a more complicated landscape than meets the eye: tobacco use among construction workers is not only on the rise but has encroached on day-to-day responsibilities. With tobacco use comes the potential to impact things such as brand perception, quality of work, healthcare costs, and health of the working population, to name a few.

There’s little progress to be made until employers can understand who is in their tobacco-using population. These efforts begin with motivated leaders who are ready to make tangible and widespread changes that come with providing benefits that have real, intrinsic value to workers.

Attitudes Toward Tobacco Use in the Workplace

Get our research report and gain three actionable insights that construction industry leaders can implement to effectively combat rising, hidden employee tobacco use.