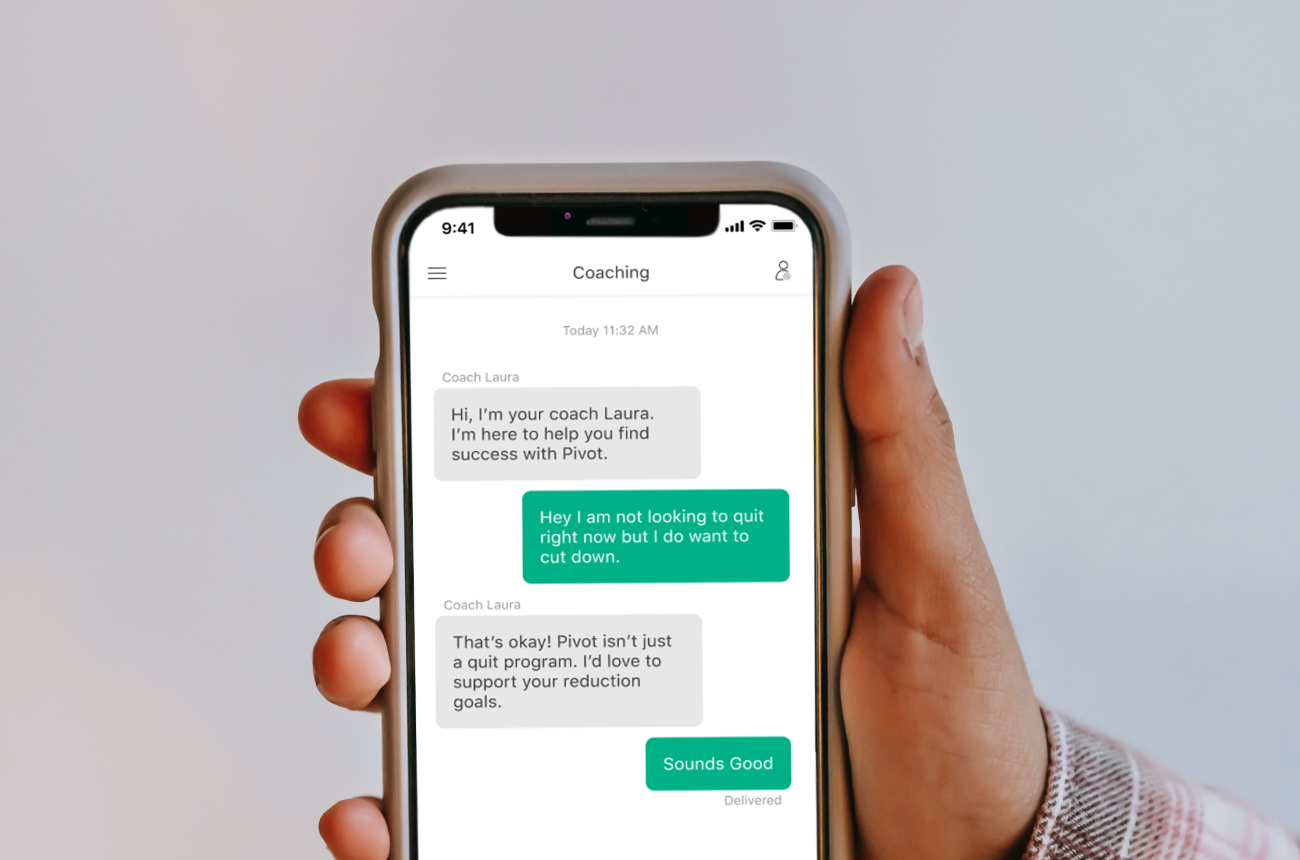 What’s one of the main differences between Pivot and other smoking-cessation programs?

Without a doubt, it’s the quality and empathy of its coaches – the folks who partner one-on-one via text on a secure smartphone app. Pivot coaches are highly trained and certified professionals who do a lot more than just cheerleading. They encourage, educate, and provide good old-fashioned companionship for your employees (a.k.a. “Pivoters”) on the journey toward quitting or reducing tobacco use.

We listened in on a panel discussion between four of the team’s all-stars* to find out what makes Pivot coaches such a special breed.

What leads a person to choose a role like this?

“I love having a positive impact on people’s lives,” says Heather, a coach trainer at Pivot. “Most Pivoters are truly motivated. They’re tired of feeling bad about themselves and having their loved ones beg them to quit. They’re discouraged because they’ve tried so often and failed. When we give them tools that really work, they’re able to turn their lives around and discover new levels of self-respect. I go home every night feeling great about what they’ve accomplished with our help.”

Jarell, a veteran Pivot coach, agrees. “For me, it’s all about personal connections. I’ve always been a people person. With Pivot coaching, you’re not talking about trivial topics. You’re getting into core issues. Conversations go very deep because tobacco addiction impacts every aspect of a person’s being. Unfortunately, the people around them often don’t understand. Once a Pivoter told me I was the only person on the whole planet that he could talk with about his difficulty quitting. It brought me to tears.”

Sofia nods. She monitors the Pivot community, a peer-to-peer resource offering a 24/7 text forum for Pivoters. “We hear that all the time, actually. Stopping an addictive habit requires a total change in lifestyle. You have to modify your daily routine, and often even change the people you hang out with. It can be awfully lonely. To be able to contact a Pivot coach and text with a compassionate person can make the difference between success and failure.”

Autumn, a coach for many years, brings a different point of view. “I’m a prior smoker, which gives me an insider’s perspective,” she says. “Although I don’t often mention the fact to Pivoters, I think it makes me much more empathetic to their struggles. And because I’ve seen so many benefits from quitting myself, I know I’m making a big contribution to their long-term health and happiness. It’s a joy and an honor to be part of their journey.”

What do Pivoters struggle with the most?

“I’d say it’s self-image,” Jarell comments. “People are stigmatized and shamed about using tobacco. They’re surrounded by so much negativity. When they feel bad about themselves, it’s hard to believe they can stick with a program and make it work. That’s when science comes in handy. We remind Pivoters that nicotine is a powerful drug, and it’s highly addictive. We explain how it works in the body, and then let them connect the dots – so they learn that being addicted doesn’t mean that they’re a bad person,” she says.

“You’re right about bringing in the science because it can help users understand why they’re on an emotional roller coaster,” Sofia adds. “When they get headaches or are irritable and angry, we can reassure them that it’s the drug in their body acting out, not them.

“On the other hand,” she continues, “some users don’t want an intellectual explanation. They just need you to be there and listen. Each interaction is different. You’ve got to stay flexible and be creative. I often have to rely on my intuition.”

A wry laugh comes from Heather. “Once a Pivoter exploded at me and yelled, “I hate you!’ But then he apologized right away. I used the outburst to illustrate how the drug was causing his volatility, turning him into a person he didn’t like. It ended up being kind of a good thing. He hadn’t realized before how profoundly the addiction was impacting his behavior, not just his lungs. That’s why we adopt a holistic approach.”

What do you mean by a holistic approach?

“Whether it’s smoking, dipping, or vaping, nicotine use is completely integrated into a user’s lifestyle. Therefore, when someone is quitting, other problems often come to the surface. Suddenly, they realize that they need to work on weight loss. Or depression. Or taking time for breaks without requiring a smoke. They discover that smoking has been an invisible ‘friend,’ substituting for nourishing relationships. It’s good when these issues arise so that Pivoters can heal in multiple dimensions. Then they’re much more likely to succeed,” explains Heather.

“I’ve got a story that illustrates that,” says Autumn. “I’ll call the woman Jane. Like many other smokers, she didn’t feel she had much control over her smoking – or her life. The two were all tangled up together. Jane noticed that she said yes to everyone and everything, and then felt put upon and resentful. So she began making better decisions. She started saying no cigarettes, and no to unreasonable demands. It freed up a lot of time. Jane then took up hiking in the mountains, which became a great joy. She invited a transformation at the heart level, and hasn’t returned to either the smoking or the service mentality ever since.”

Are there sometimes Pivoters who aren’t ready to quit?

“Definitely,” says Jarell. “And we work with them at whatever stage they’re in. One man told me he only joined Pivot because his employer offered it for free. I asked when he might be ready to quit, and he wasn’t willing to set a date. So we talked about other things. One day he mentioned that he hadn’t smoked for a week. Then it was two weeks. By the time our sessions ended, he hadn’t smoked for over four months.

“I attribute this to the fact that Pivot is nonjudgmental and not pushy. The program doesn’t force anything on anyone. It lets people work at their own speed, whether that means actually quitting or reducing down to a couple of cigarettes a day. You could say that flexibility is baked into the system.”

Sofia breaks in. “I had a similar story. She was a nurse and had lost her mother to lung cancer. You can imagine how much shame she felt about still smoking. But she couldn’t envision quitting completely. She weaned herself by setting a limit of three cigarettes a day, which she sealed in a plastic bag every morning. It worked for a while. But then she relapsed to a pack a day. Eventually, by dealing with her guilt she got back on track and was successful.”

What do you do when someone backslides?

“It happens all the time,” says Jarell. “Studies show that it takes an average of seven tries before a person succeeds in quitting. So in coaching sessions, we normalize the experience. We reassure them that relapsing is really common. The good news is that each time a person tries, it gets easier the next time. Knowing this helps them not feel like a failure, so they can dust themselves off and try again.”

Do you have a favorite success story?

Heather smiles. “I had one gal who set a quit date and said she’d buy a new flatscreen TV when she’d been smoke-free for seven days in a row. On day six, she relapsed. But she didn’t cheat and get the TV. Instead, she just started over again. Months later she announced that she’d bought herself a brand new car with all the money she’d saved from quitting. I was so proud of her.”

Have you seen changes since the start of the pandemic?

“Absolutely. People use tobacco to self-medicate for stress, discomfort, trauma, or general despair. The pandemic increased all of these factors, especially for front-line workers, delivery people, those in service professions, and anyone who lost a job or loved ones. In other words, almost everyone. To compound issues during COVID, there was the isolation of extended lockdowns. We’ve ended up listening to personal topics like children, pets, and hobbies even more than usual during coaching sessions because it helps strengthen the relationship and makes Pivoters feel worthy and cared for. ” notes Autumn.

“That personal relationship is a primary benefit of having a coach,” says Sofia. “When you’re less stressed and have a safe outlet for your emotions, you don’t need tobacco as a coping mechanism as much. But Pivot offers more than just an outlet. A good coach listens with their heart, like the best kind of friend. And who doesn’t need more high-quality friends?”

*Names have been changed to protect the Pivoter-coach relationship.

Do you think you could benefit from an expert smoking cessation coach?

Discover the power of a Pivot coach.

Thank you! Your submission has been received!
Oops! Something went wrong while submitting the form.
Coach Corner